The Burnett family has a long, rich history with the Potawatomi people. French fur trader William Burnett settled on the St. Joseph River near Niles, Michigan, after the Revolutionary War. He established two successful trading posts and eventually married Kaukima, daughter of revered Potawatomi leader Nanaquiba and sister to Topinabee. Kaukima and William had seven children: James, Abraham, John, Isaac, Jacob, Nancy and Rebecca. Abraham attended Choctaw Academy in Kentucky, which the U.S. established to educate future tribal leaders. In 1826, he received three sections of land near Logansport, Indiana, and a community 13 miles west of it bears his name — Burnettsville. Although Abraham never married, he adopted a young boy named Nanweshmah. After the child’s parents died, Nanweshmah took his adopted father’s name and became known as Abram Burnett. Abram’s mother Conezoquah was the daughter of Potawatomi headman Chebaas and a cousin to Abraham. His father Shauquebe was a warrior and leader among the Wabash Potawatomi.

Following in his adopted father’s footsteps, Abram studied at the Carey Mission under the administration of Baptist missionary Isaac McCoy in Fort Wayne, Indiana, and the Choctaw Academy in Kentucky. The skills Abram obtained while in school proved important in the trying years to come, and he worked as an interpreter for church and governmental purposes. Burnett married a wealthy Potawatomi woman named D’mooshkeekeeawh. English artist George Winter captured sketches of Potawatomi and kept written records on his experiences. He wrote, “She was an Indian woman of much personal attraction. She excited the admiration of white men as well as that of the Indians. … Abram Burnett appeared always proud.” As more settlers wanted land in the Great Lakes region, Potawatomi and other Native American tribes lost most of their ancestral homelands. In 1830, President Andrew Jackson signed the Indian Removal Act, granting the government authority to remove tribes west of the Mississippi River. Federal officials called a meeting with the Potawatomi in the fall of 1838 as a guise to get the Tribe and its leaders together. Instead of an opportunity for council, volunteer militia detained as many Potawatomi as possible, including Burnett. On Sept. 4, 1838, the Potawatomi began their forced removal, walking 660 miles from present-day Indiana to present-day Kansas known as the Trail of Death. More than 40 Tribal members perished on the journey, mostly women and children. Because of Chief Burnett’s background, he also served as an interpreter on the Trail of Death. Jesuit priest Benjamin Petit joined the Potawatomi on the removal and fell ill once arriving on the new reservation. Burnett took it upon himself to take Petit to the nearest Jesuit seminary in St. Louis to receive care, but Petit died February 10, 1839.

Adapting to the new lands in present-day Kansas proved difficult. The lack of provisions promised by the federal government hindered the Potawatomi tribe’s ability to successfully settle on the new reservation. Many more perished, including Burnett’s wife D’mooshkeekeeawh in 1842. Burnett represented the Potawatomi in Washington D.C. on numerous occasions, and on one trip, he met his second wife Mary Knofflock. They wed in 1843 and had six children: Joseph W., Mary J., Mary A., Catherine, Clara and Abraham Lincoln. Although the prairie lacked many of the resources familiar to them, Burnett and others established successful businesses and took advantage of the Oregon Trail that cut through the Potawatomi Reservation. In 1848, he settled on what remains the highest elevation in Topeka, Kansas, and became a successful farmer and sold livestock. During this time, the community had several factions of Potawatomi with varying views. He supported efforts to create a community-approved business committee. This ideal continues today with Tribal-member elected legislators and executive body members. While in Kansas, he also wrote and spoke on behalf of the Tribe, and Burnett’s signature appears on the Treaty of 1846, Treaty of 1861 and Treaty of 1867. Burnett died in 1870. Afterward, Mary and the children relocated to present-day Oklahoma where the Burnett children carried on the family legacy of leadership and entrepreneurship. 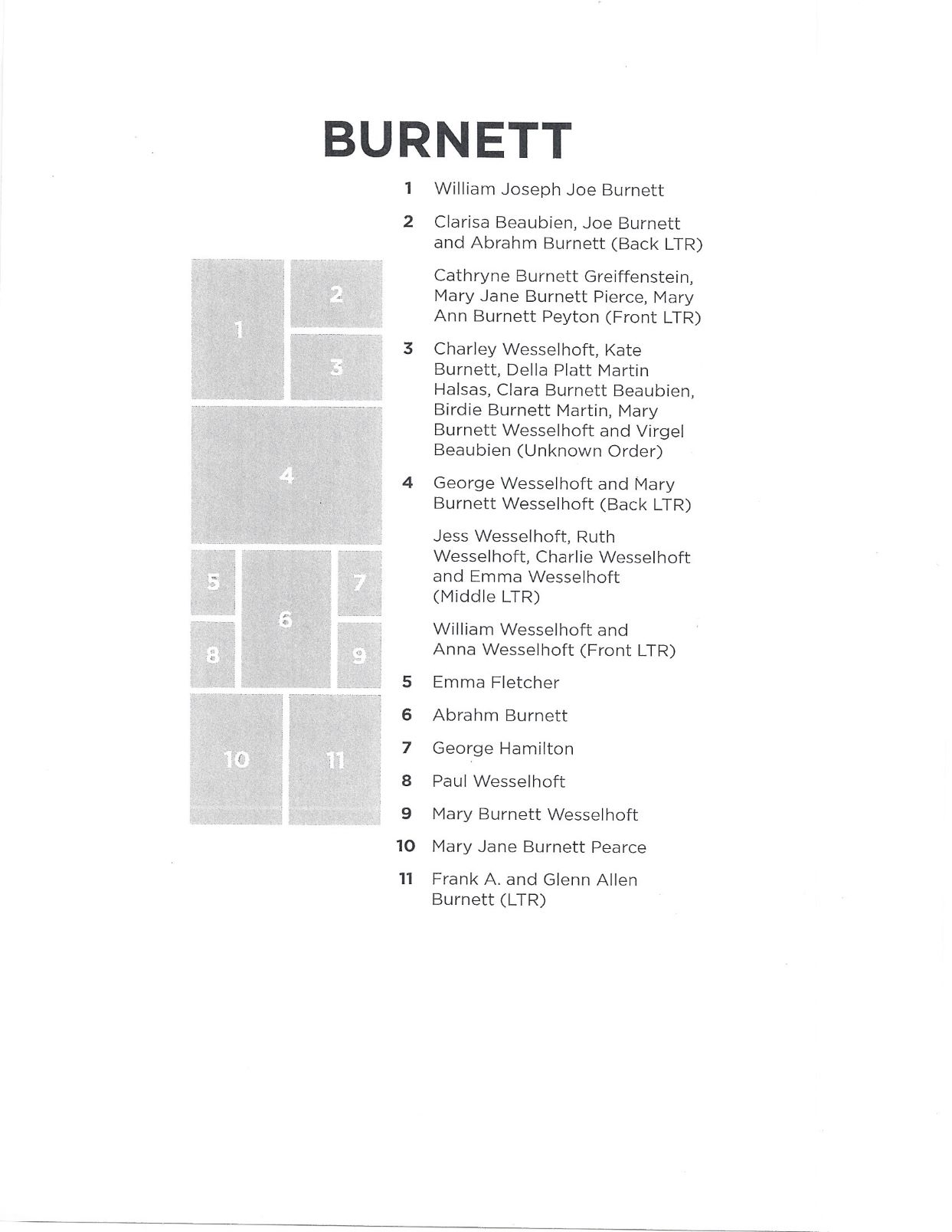