Darling was of Scottish and Irish descent and operated a ferry. He married Elizabeth on July 15, 1936. She was the daughter of Antoine, known as one of the first residents of Chicago, and Archange Chevalier Ouilmette. Archange’s mother, Chopa, was the daughter of Potawatomi warrior and headman named Naunongee from the Calumet River Potawatomi. Chopa is related to other famous Potawatomi leaders through marriage including Nuscotomeg (Mad Sturgeon), Wabinewa (White Sturgeon) and Main Poc. Chopa married Francois Chevalier, and the Chevalier family held a reputation as one of the main French-Canadian fur trading families in St. Joseph, Michigan, in the 1700s.

Antoine built a home near the Chicago River, and because of Archange’s Potawatomi heritage, they did not flee during the Battle of Fort Dearborn in 1812. They protected William Wells’ daughter Margaret Helm as the conflict ensued by hiding her under a feather bed. Wells and approximately 30 Miami warriors traveled from Ft. Wayne, Indiana, to present-day Chicago to assist Ft. Dearborn residents as they left the garrison. One year later, the Ouilmettes had a girl, Elizabeth, who was one of eight children.

Elizabeth’s first married Michael P. Welch on May 11, 1830, and they had two children: Catherine Welch and Joseph Welch. She then married Lucius Ripley Darling in 1836.

The Weekly Wisconsin newspaper in Milwaukee, Wisconsin, published on July 21, 1836, “In this Town on Friday morning last by rev. S. W. Beardsley, Mr. Lucius R. Darling, of Racine, to Miss Elizabeth Ouilmette of this place.”

He removed to Council Bluffs, Iowa, with Elizabeth in 1837 and joined Waubansee’s Potawatomi band, serving as a trader. Their son William was baptized there on June 9, 1838. They had thirteen children total: William, Francis L., Eliza, Lucius, Louis Oliver, Charles Nathan, and the remaining children died while infants.

The Treaty of1846 required all the Potawatomi removed west to relocate on one reservation in Kansas, and the Darling family made their way there in 1847. Their children attended the Baptist Mission School for a year before a Catholic school opened nearby in St. Marys, Kansas.

On July 10, 1850, Lucius established a contract to begin operating the Potawatomi Nation Ferry 1.5 miles from Uniontown for $650 a year.

Due to pressure from incoming settlers and business, the Potawatomi signed a treaty in 1861 that offered an opportunity to become U.S. citizens and receive land allotments. Although Elizabeth passed away before the process was finalized, Lucius and their children chose to receive individual plots of land and became members of the Citizen Potawatomi.

Lucius then married Theresa Hardin and had one child who passed away at a young age. With his third wife, Esther Hartwell, he had three children, none of whom were Potawatomi.

The Treaty of 1861 was not successful for many Citizen Potawatomi. The government refused to uphold all the provision’s agreements, and numerous members lost their lands. The Tribe decided to sign another treaty in 1867 with the federal government that allowed Citizen Potawatomi to sell land in Kansas to purchase a new reservation in present-day Oklahoma.

In 1872, an initial set of families made their way to the new reservation. Later that same year, a second group of families traveled from Kansas to present-day Oklahoma, including the some of the Darlings. Lucius and Elizabeth’s children began crafting lives of their own on the prairies of Kansas and Oklahoma, while others looked for new opportunities on the West Coast.

Lucius A. Darling never married, and received his allotment just north of present-day St. Louis, Oklahoma, in 1887. He passed away from pneumonia in February 1892 in Red Rock, Oklahoma.

William also never married, according to his sister Eliza Bressman’s testimony, and received an allotment in 1872 near Highway 62 and Indian Meridian Road, east of present-day Choctaw, Oklahoma.

Francis L. “Frank” received his allotment in 1887, which included 320 total acres and portions of present-day Lake Thunderbird State Park. He married three different times. First was to Mary Sharrai, and they had three children: Rose, Carrie and Edward. After Mary passed away, he married Jennie Baunta and finally, Fannie Sutherland. However, according to family records, due to the fact that Fannie never officially divorced her husband prior to Francis L, some never legally recognized the marriage.

Eliza Mariah married William Henry Smith and had five children: William Elsworth, Alice May, George B., Fedrick W. and John William Through her second marriage to Daniel A Bressman, she had one child, Daniel Oliver.

Although Louis Oliver lived in Hoyt, Kansas, he received an allotment near Macomb, Oklahoma, in 1887. He and his wife Maggie had seven children: Frances, Anna, Louis O. Jr., George, Ernest, Louisa and Lucius.

While most of Elizabeth and Lucius’s children helped grow and establish the Potawatomi connections in Oklahoma, Charles Nathan moved West, settling in Paloosa City, Washington. He and his wife had three children: Frank, Otis and Bina.

Since the late 19th century, Darling descendants have gone on to serve in the military, establish businesses, become talented athletes and more. 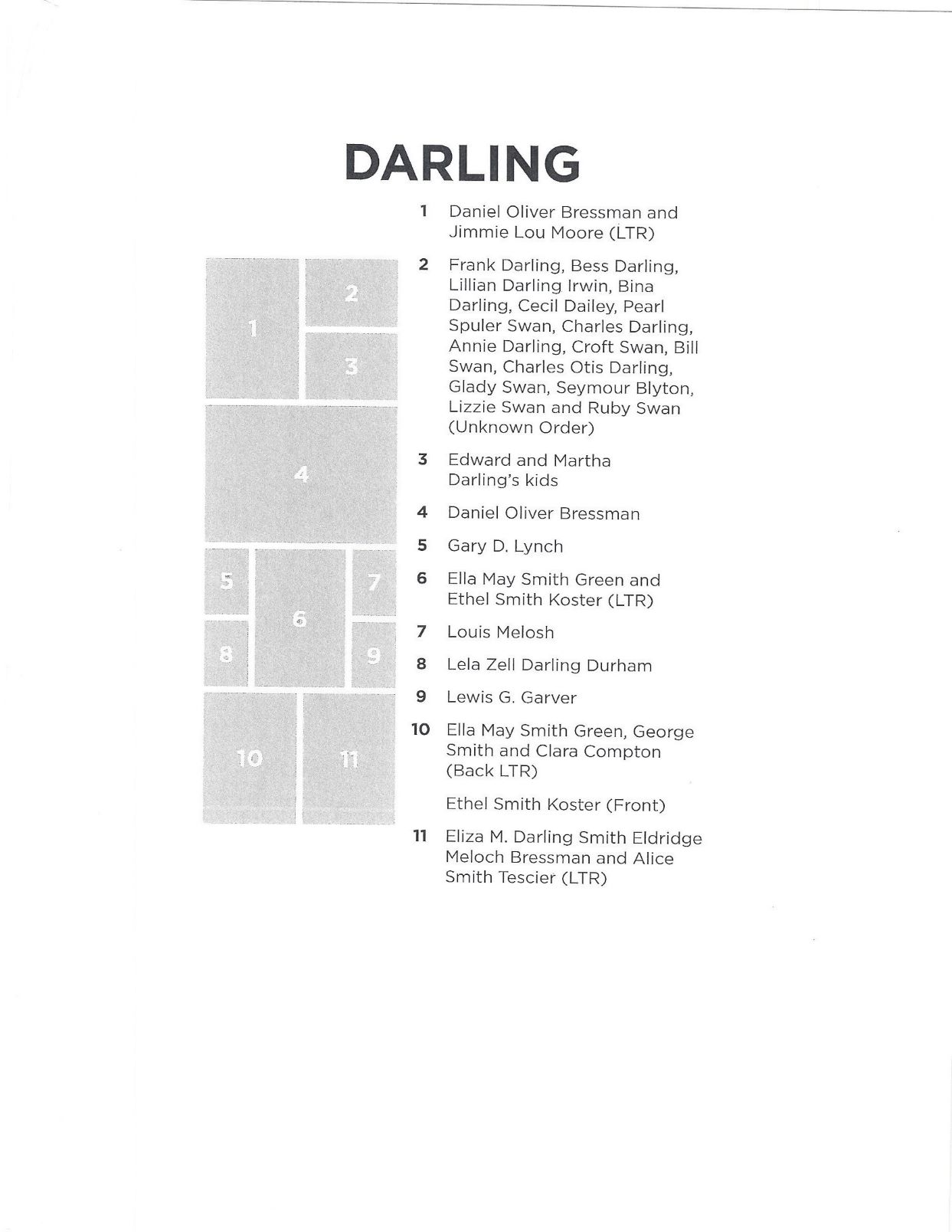