The Indian Territory land runs remain some of the most notable events in the state’s history. The six that took place between 1889 and 1895 helped pave the way to Oklahoma statehood in November of 1907. Many people associate them with a feeling of excitement in the air as pioneers and cowboys waited to claim their new property in uninhabited land. However, the reality was much starker with greed, violence and cheating playing parts.

The first land run took place on April 22, 1889, and established present-day Oklahoma City and Guthrie in one day. The Citizen Potawatomi Nation’s historical ties are with the Land Runs of 1891, which took place on September 22, 23 and 28. They resulted in the founding of two new counties — “County A” and “County B” — later named Lincoln County and Pottawatomie County.

The U.S. government forcibly removed many tribes to Indian Territory following the passage of the Indian Removal Act of 1830, with the Potawatomi taken from their homelands to Kansas during the Trail of Death in 1838. After the Civil War, President Abraham Lincoln signed the Homestead Act of 1862, encouraging independent farmers to move west with the offer of a title to a plot of land after showing improvements for five years.

The Citizen Potawatomi signed the Treaty of 1867, which resulted in Tribal members selling allotments in Kansas to purchase a new reservation in present-day Oklahoma. Over the next decade, members moved and took allotments across the new reservation. Then, the Dawes Act of 1887 authorized the subdivision of communal Native reservations throughout the United States. After all Citizen Potawatomi — young and old — received plots of land, the government deemed the remaining acreages as “surplus land” or “unassigned land” for settlement during the land runs.

The Homestead Act and the Dawes Act’s ramifications meant the Iowa Tribe of Oklahoma, Sax & Fox Nation, Citizen Potawatomi Nation and Absentee Shawnee Tribe owned a vast majority of land, either by individual members or as part of a reservation, that would be settled during the Land Runs of 1891.

Some historical accounts of Sept. 22, 1891, claim more than 20,000 people lined up in various locations surrounding the settlements, waiting for the starting signal to stake their claim. More lined up the following day for a second land run, which settled Tecumseh as the seat of “County B.”

Citizen Potawatomi Nation began purchasing back original allotments in the 1970s to re-establish and expand its sovereignty as a Tribe, a costly and expansive process that continues today. 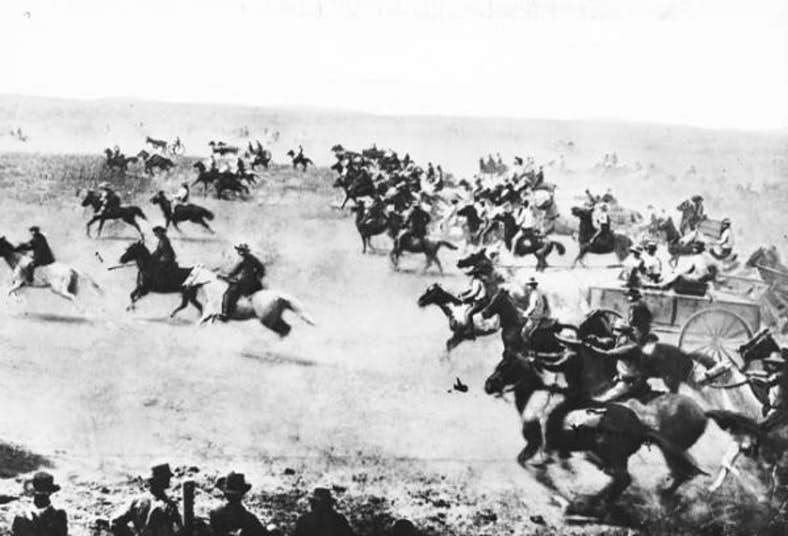