The Dawes Act of 1887, also known as the Dawes Severalty Act or General Allotment Act, was a bill passed by congress to split up communal lands held by tribal nations. The purpose of the bill, as stated by its sponsor Senator Henry L. Dawes of Massachusetts, was to radically assimilate Native people into white society by introducing individual land-ownership to Indian Country—a process known as “allotment.” The bill would prove disastrous for Native communities as land holdings throughout Indian Country reduced dramatically.

The act outlined the powers of the President of the United States to survey and allot tribal lands to individual members. 160 acres would be distributed to the heads of the household, 80 acres to unmarried persons above the age of 18, and 80 acres to orphan children under the age of 18. The discretionary powers allocated to the executive branch through the act allowed significant flexibility to the President in allotting lands to different tribal communities. Lands not allotted to any members of a tribal community were declared “surplus” and offered for sale to non-Indians, with revenue from sales held in trust by the federal government.

While the law promoted an idea of private Indian land ownership, whereby Indians would embrace capitalism and assimilate into white society, the law failed to account for members of tribal communities who were disabled, elderly, or too young to manage their allotments. Subsequently, millions of acres of Indian land were transferred into the ownership of non-Indians. Between 1887 and the passage of the 1934 Indian Reorganization Act formally ending allotment, roughly 90,000,000 acres of land had been lost as a result of the Dawes Act.

Well before the 1887 allotment laws, the Citizen Potawatomi Nation had accepted allotment in Kansas through the treaty of 1861. Within just six years of accepting allotment, however, the Citizen Potawatomi members found themselves destitute in their own lands. Members of the Citizen Band later relocated to Oklahoma, purchasing the land it resides on today. However, as a consequence of many members being unable to claim their Oklahoma allotments, many allotments remained unoccupied through 1880’s. This, in conjunction with the passage of the Dawes Act, meant that the CPN found itself once again losing land to non-Indians. 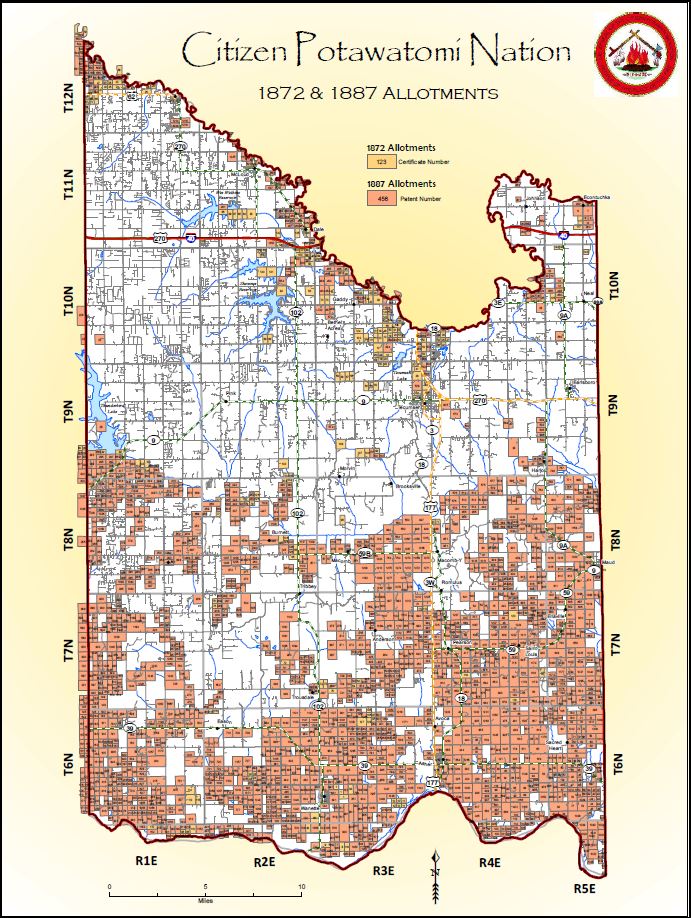