The Anderson family’s Potawatomi roots began in 18th century Peoria, Illinois, when a Potawatomi woman named Mary C. Tremblay married a blacksmith named John Anderson. They had three children: John Charles, Mary Ann and Peter. John Anderson’s family settled in downtown Peoria, Illinois, where he partnered with William Tobey to establish a plow manufacturing facility. The duo perfected plows specific to tilling prairie soil. Their product’s popularity prompted Anderson and Tobey to change from making them by hand to constructing them with steam machinery. John passed before the business reached its highest success.

After becoming a widow, Mary Anderson and their three children relocated to Council Bluffs, Iowa, to join other removed Potawatomi. Once President Andrew Jackson signed the Indian Removal Act of 1830, the government began forcibly removing Potawatomi and other Native Americans west.

Mary passed away in 1848, and her and John Anderson’s children moved to Silver Lake, Kansas, in 1851 along with their grandmother, Archange Tremblay. John Anderson Jr. attended school in Westport, Missouri, but the desire to continue the family’s blacksmithing traditions inspired him to learn the trade. John Anderson Jr. returned to Silver Lake in 1862 and married fellow Potawatomi Elizabeth Hardin. He worked as a blacksmith, and during the Civil War, cared for military mules.

In 1871, they were part of the first caravan of Potawatomi to settle the new Potawatomi lands in Indian Territory. Three Andersons, including Pete, John and Mary Anderson Bourbonnais, established a settlement called Pleasant Prairie in present-day southern Pottawatomie County, Oklahoma. Mary Anderson Bourbonnais was very involved with the Shawnee Mission. She became the first Sunday school superintendent in the county and often wrote letters campaigning to congress and the federal government on behalf of the Tribe.

Pete and Julia (Hardin) Anderson eventually settled near Wanette, Oklahoma. They had seven children, but Julia passed away after birthing their youngest in 1886. Pete then moved and farmed his allotment in the northwestern part of the Potawatomi reservation near present-day Choctaw.

Before statehood, Indian Territory was a haven for cattle rustlers and outlaws, including the notorious John Bly. He held a reputation for stealing horses and highway robbery and eluded conviction. To end the Bly Gang’s spree, a judge issued arrest warrants for the Bly Gang on Christmas Day 1890 for stealing cattle and selling whiskey.
Sherriff DeFord deputized Pete’s friend Frank Gault, and Gault swore Pete in as a deputy to help arrest the Bly Gang. Christmas 1890, Pete and Gault’s party set out on horses to find Bly, and they came upon the outlaws butchering cattle in a field. Gunfire quickly ensued, and the officers dismounted and moved toward the source. A bullet struck Pete Anderson, killing him instantly. Pete’s children then lived at the Sacred Heart Mission until a fire destroyed it in 1901, and a local attorney married to Mary Anderson Daniels, John and Elizabeth Anderson’s daughter, and her husband became legal guardians over Pete’s children.

John Jr. represented the Tribe, working with congress and the federal government to get Potawatomi allotments in fee simple, which gave Tribal members ownership and allowed Citizen Potawatomi to sell their properties without approval of U.S. governmental entities. Although difficult, he persisted, and most Citizen Potawatomi received titles to their land. John Jr. and his children took allotments near Shawnee where he resided for the remainder of his life.
The Anderson family and descendants spread to various cities and towns across the United States and world at-large. However, their influence and legacy remains as one of the largest Citizen Potawatomi families today. 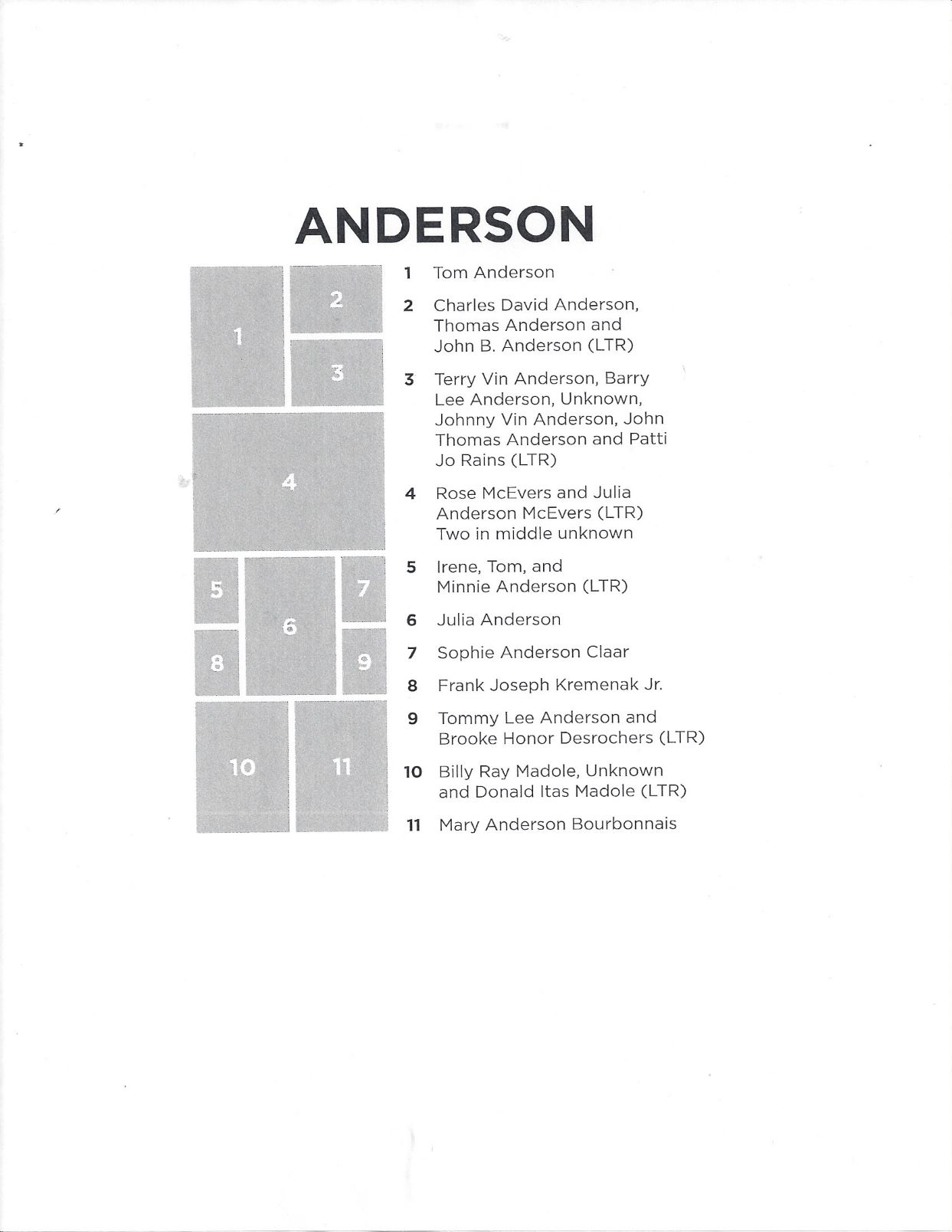