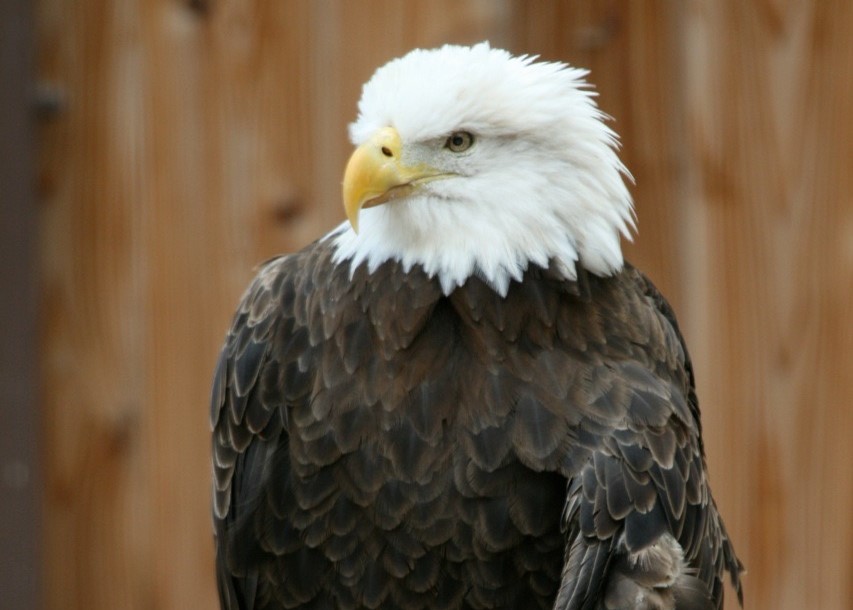 Shay was one of the first eight eagles to call the CPN Aviary their permanent home. She was the first of those eagles released into the enclosures when the aviary opened in June of 2012. She was our oldest female at the time and was a dominant presence in her enclosure acting almost as a mother figure for the younger eagles. She was given the Potawatomi name Nétem-danes: First Daughter.

However, Aviary Directors, Jennifer Randell and Bree Dunham, had the opportunity to meet her long before the aviary was open. In the fall of 2008, they began a portion of their hands-on training at Sia: The Comanche Nation Ornithological Initiative and became acquainted with her there. She was found in Florida grounded and unable to hunt. She was taken to the Florida Audubon Society Rehabilitation Center for treatment where it was discovered she had been shot in the wing and would not be able to have full use of her wing again. Upon intake she was listed as an adult female of 5 years of age because of her large size and full white head and tail. After 6 months of healing, she was added to the facilities education permit and remained there several years before being transferred to Sia in 2005. When they first met her, there was something familiar about her demeanor and they both felt like this was an eagle they had en encounter with in the wild a year prior, but she had been in captivity much longer. Regardless, there was a mothering presence that both these eagles exuded and for that, they began to call her Shay. That was their mother Shiree, who had recently passed, nick name. As construction of the CPN Aviary was nearing completion the decision was made to transfer several of the Eagles from Sia that Jennifer and Bree had become close to over the course of their training there. Shay was one of those Eagles. During their training they discovered that she loved to be misted with the water hose when refilling water, washing down the enclosure or watering the plants. She would run and jump to her perch batting her wings and vocalizing almost demanding to be sprayed. No matter the weather, freezing cold or sweltering heat, she would spread her wings open wide and begin beating them in the mist with such force she could hardly hold on to the log. She had the staff trained very well.

In the fall of 2015, Shay was the first Bald Eagle at the CPN to undergo cataract surgery. Shay’s talon and beak began to turn white. Often as birds age pigment, like our hair is no longer present. Veterinary staff estimated her to be well into her 50’s when she passed peacefully with her caretakers by her side.