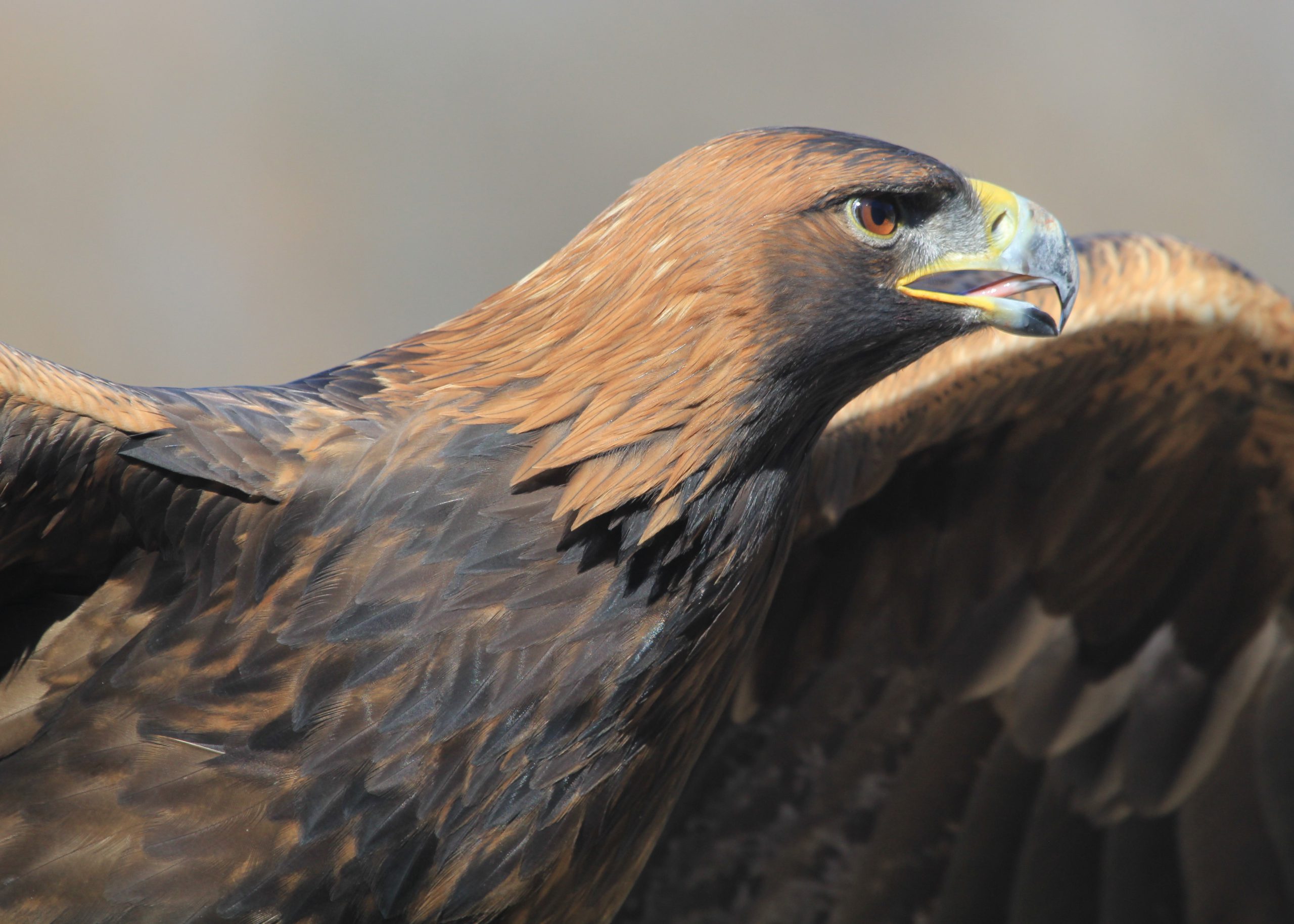 Myanabe, a four-year-old Golden Eagle, was originally found injured near Kansas during the fall of his fledgling year. He was struck by a vehicle when he failed to gain enough lift to clear the oncoming traffic. He was transported to a local wildlife rehabilitator for treatment. Upon intake, his initial prognosis was not promising, even though he had not broken any bones; his head took the brunt of the impact. After checking his bloodwork, rehabbers understood what contributed to the collision. He had lead poisoning. While he had never been shot, he likely ingested a meal that was contaminated with lead shot. In wildlife, lead is most toxic when consumed and once it is broken down and enters the bloodstream, lead can cause a wide range of complications from muscle weakness to organ damage.

Initially Myanabe had to be hand fed because he could barely stand, could not see and had multiple seizures a day. He recovered well but was deemed non-releasable because of permanent damage to his eyesight. He could see well in the distance but had difficulty with depth perception of things close to him so he would never be able to hunt on his own. Some birds with diminished eyesight do not do well as glove trained birds. Myanabe, however, adapted exceptionally well.

This young eagle is known to us by two important names. He came to the CPN Eagle Aviary from Sia: The Comanche Nation Ethno-Ornithological Initiative where the aviary staff did a large portion of their training. There he was given the Comanche name Pue watt [can’t see] in honor of one of their elders, a medicine man with the same name. However, Potawatomi believe that Mamo-Gosnan [the Creator], only sees the top of your head and cannot see your face until you have been given your Potawatomi name. We feel that it is important to give all the eagles we care for a Potawatomi name since they can no longer fly and carry our prayers to Mamo-Gosnan. We wanted to honor our traditions as well as his Comanche name in choosing his Potawatomi name. We chose Myanabe, which means he sees poorly.

During his seven years here Myanabe became a huge part of our program and our hearts. He was often the star of the show during tours and he became the face of the aviary for offsite presentations at schools and events all across the state. He allowed us the unique opportunity to share about native wildlife and conservation but he also gave hundreds if not thousands of tribal members and community members alike the opportunity to reconnect on an individual level with the living eagle. We are humbled to have been given the opportunity to be a part of his journey and that he allowed us to share him with so many. We are heartbroken but we will celebrate his life, the impact he had on us, our program, the community and beyond, and we greatly appreciate his contributions to wildlife education and conservation.