Renaming of the Citizen Potawatomi Nation

The U.S. Secretary of the Interior authorized the special election, which differed from the Nation’s annual election because members voted to revise the Tribal constitution with two separate amendments. The first amendment included the name change, and the second removed age restrictions on scholarship funds.

Out of the 13,969 mailing notices sent to members, approximately 4,000 Potawatomi returned their registration forms to become eligible to vote in the special election. More than 1,500 were in favor of the name change, and 1,813 approved removing age restrictions on scholarship funds.

CPN’s seal prior to 1996 featured a black circle and included the words “Great Seal of the Citizen Band of Potawatomi Indians of Oklahoma.” After the renaming passed, Chairman Barrett drew the Nation’s current seal with colored pencil, pen, and ink by hand. Designers crafted a digital version, which became the official symbol of CPN in 2003, and is still in use today. The seal serves as a visual representation of the strength of the nation, its sovereignty, and its rich history and culture that will continue on for generations to come. 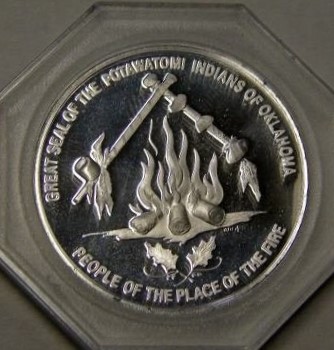 An example of the CPN's former seal.