Potawatomi made first contact with Europeans indirectly through warfare. By the 1600s, the Anglo-Dutch allied Iroquois Confederacy had depleted all the valuable pelts east of the St. Lawrence River and began raiding Algonquin tribes in Michigan. The invaders were looking to control the untapped resources of the western Great Lakes.

Outmatched by superior weaponry, the Potawatomi and other tribes of central Michigan were forced to flee the region and become refugees in Wisconsin. Eventually settling in the Green Bay region, the Potawatomi and Odawa helped establish the largest Native settlement and trade center in Wisconsin known as Mechingan. French explorers were lured to Mechingan and the surrounding area, trading beaver for French goods and weapons.

Recognized as the dominate tribe in the region, the Potawatomi hosted several of New France’s most notable explorers, missionaries and armed forces. Alliances built from these encounters would be valuable and long lasting.

Landing on the shores of Green Bay in 1634, French explorer and interpreter Jean Nicolet claimed the region for New France and established first contact with the Potawatomi. Twenty years later, traders Pierre-Esprit Radisson and Médard Chouart des Groseillers spent several months in Potawatomi villages bartering with local communities. Impressed with their trade goods, the Potawatomi visited the French trade settlements of Montreal. There they established political ties with New France that would eventually develop into a corporate and kindred bond between the two cultures. 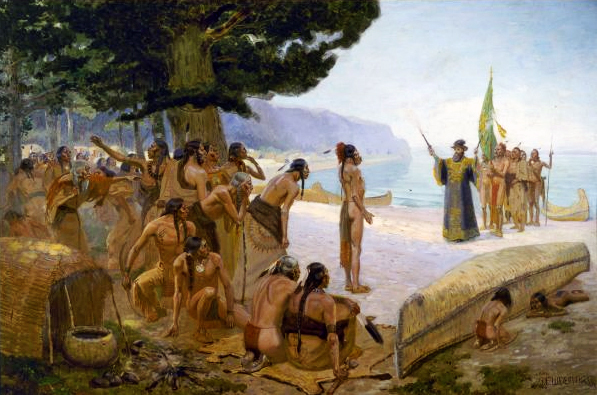